I've been unbelievably busy lately, so busy that I had the urge to take time and blog about it. The real truth of the matter is that I've been having so much fun working on my current projects, that I wanted to share some images from them. This "e-collage" I made in iScrapbook...( i just typed that as a joke, but check this out) are some of the drawings sitting on my desktop, analog and digital. And yes, both are a complete mess. 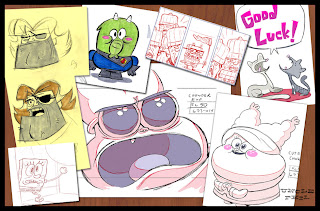 I just feel really lucky to be able to work with some of the coolest people on some of the most fun projects. There's a lot of shit out there, from people to jobs, and I feel really grateful to be where I am, doing what I do (or trying to do in most cases).

Something I did for the lady.. (sorry about the foul language mom... i swear I learned it from grandma) 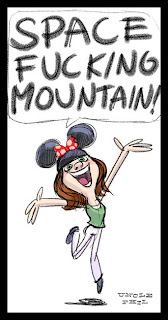 That's it for tonight.

listening to: Morissey and Joy Division... obviously
Posted by Uncle Phil at 12:03 AM 27 comments:

Snuck in some doodle time today... this very moment, to be exact.

Thought I should post something.. so here ya go. 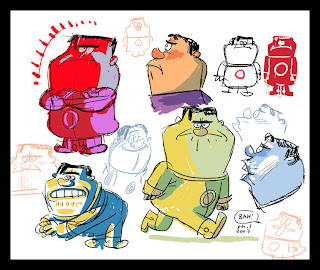 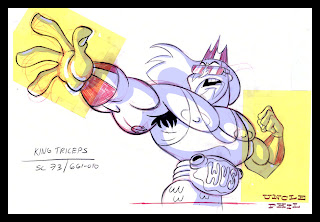 Here are some drawings of King Triceps. He was for an episode of The Grim Adventures of Billy and Mandy entitled "Hey, Water You Doing?". It was boarded by Mr. Ian Wasseluk. Ian likes doing spoof jokes, and Triceps was one of those. He's part King Triton from The Little Mermaid and part Macho Man Randy Savage. It was a fun (and difficult) episode to draw. There were a ton of new characters in this one.

Designing on Billy and Mandy was kind of tricky. The show tends to be a mish-mash of design sensibilties. The characters have a lot of very graphic elements, but also tend to be equally fleshy. I was constantly trying to find my balance of those two things. My attempts, successful or not, were always fun to create. And I really credit Maxwell Atoms for trusting his designers, and allowing us to experiment quite a bit on our own.

At times, this made for some of my most confident drawings, and at other times I felt lost in the woods behind the Oakwoods playing with fire crackers.

The nice thing was that I had quite a bit of reference from previous seasons to refer to when I really got stuck.

C.H. mentioned on his blog, the difficulties in breaking down his personal style on Chowder so that us designers could use similar theories. This was and will always be a very effective and direct method of getting into the head and hand of the guy that pretty much did the first set of drawings straight from his gut. But hat I find to be the best way to create designs that match the spirit of a new show is to really look at work that may have influenced the creator/designer. So besides trying to look at every scrap of paper with a drop of the Greenblatt magic, we're looking at a lot of Aragones, Coker Jr., Bradfield, Toriyama, and Scarry. It's been a really fun and educational ride.

I just realized that I've posted 2 different sets of mermaid designs from B&M, I swear I don't have a mermaid thing.

...and a big thanks to Amanda for making me that sweet "Uncle Phil" stamp you see on those designs.
Posted by Uncle Phil at 11:19 PM 20 comments: