Life Drawing at the EAA

I did some life drawing at the Entertainment Art Academy on Saturday morning. It was a good time and the model was pretty great. I was standing and my easel was a little low, so I kept drawing figures with unnaturally short legs. Oh well.

Here are a few that I had some fun making. 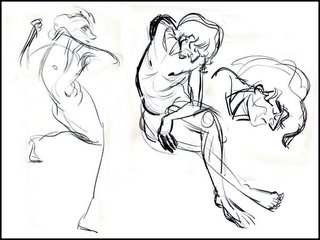 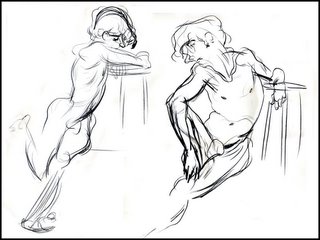 feeling: prematurely sleepy
listening to: "Never Had a Dream Come True" Stevie Wonder (Sure, i'm more of a "Hey Harmonica Man" guy, but there are no lies on this blog, and that's what's playing)
Posted by Uncle Phil at 10:30 PM 27 comments:

I was brushing up on some flash and did this sketch. You'll be seeing a lot more of these guys on the blog in the future. They're for a project I'm developing, and I'm still doing a lot of soul searching to figure out who the characters are. 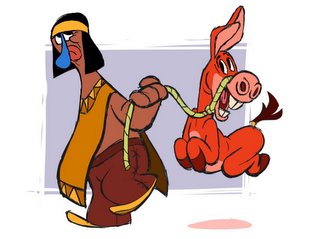 I just got back from a research trip to Las Vegas. I didn't learn much, but I had a great time. One of my favorite highlights of the trip was eating a deep-fried Twinky in historic Downtown Vegas. I really dug Downtown, it was the Vegas that Hollywood put in my head. If you're going to visit, make sure you don't miss old Vegas.

It's been a while since a Sunday Comics post. So, BOOM, you get one today.

These are both scans of Guillermo Divito originals I own. Neither feature any of the lovely ladies he's recognized for, but I think they're cool none the less (here's a great example of said ladies Oscar Grillo posted on one of his blogs). I've always loved seeing how artists grow, so the black and white drawing from 1939 is really interesting for me. He was 25 at the time, and the artistic growth he would experience in just the next 5 years is really inspiring, let alone the growth through the entirety of his career.

I hope you enjoy. 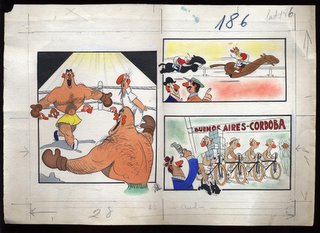 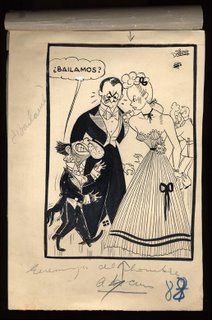 Also be sure to check out Alberto Ruiz's "Process Junkie Blog". He's been posting some real cool stuff by illustrator Jorge Ginès.

Back from New York

I'm back from New York. After attending my first gallery opening with some of my own work on display, I've decided it was pretty sweet and I want to do it again. Thank you Liz for curating the show (and inviting me to contribute) and Stay Gold for having such a sweet space.

It was great to see some old friends out there and being back in New York just feels great. I miss it every day.

Here are some photo's from the night, taken buy Tennessee's own Jenna Adcock. "Do what?" 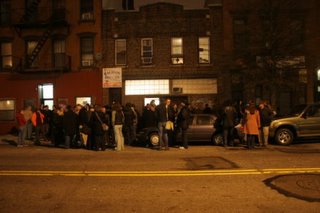 This is what the gallery looked like from across the street all night. 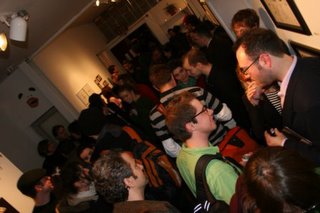 Inside was unbelievably crowded as well. I didn't really get to see the show until I went back the following day, I wasn't nearly brave enough to try and inch my way around the gallery. 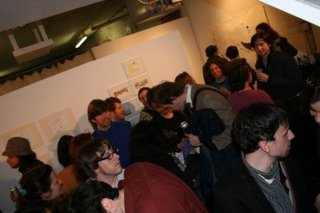 Not 10 minutes after I had arrived, I heard that they had run out of free booze (coincidence i swear). I was extremely happy because I thought that pretty much proved that we had a successful turnout. But then I thought that everyone would clear out and that was a disappointing thought. Nope. People didn't leave, they just simply went to the bodega on the corner and bought their own alcohol. Pretty sweet indeed. 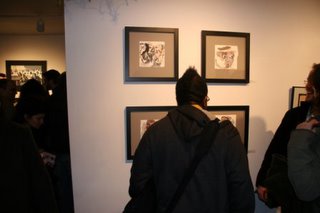 Here's a guy with a mohawk looking at my stuff. I don't know who he is, but I think I may have seen him earlier in the day at my Alma Matter, SVA. So thanks for coming.

The show will be up for the remainder of the month, so check it out if you can. It's worth it just for Christy Karacas's two pieces (and a little bit of new animation). If you haven't seen Barfight or Space War watch them now and then go to the show. And you can buy a strong man while you're there.

My computer's still at the mechanic's so this one's going to be short.

Here are some from the pile next to my desk at work. I really wanted to post some marker sketches I had done, but they seem to have gone missing. Apparently Warner Bros. Animation is not a safe place to leave girly marker sketches over the holidays. Oh well. Maybe I brought them home or something. 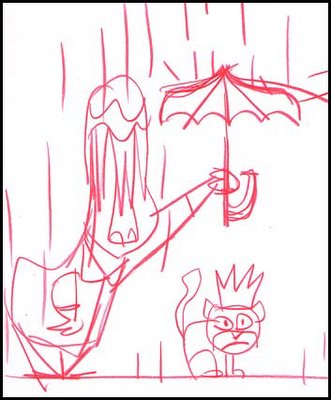 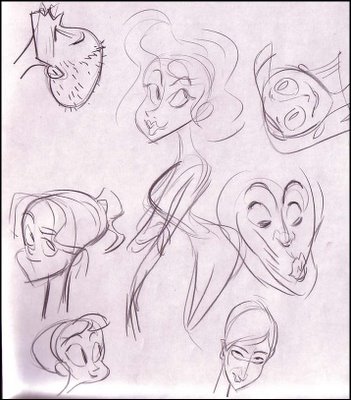 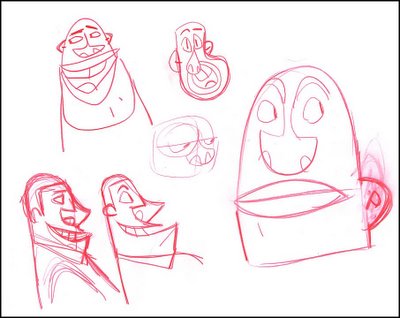 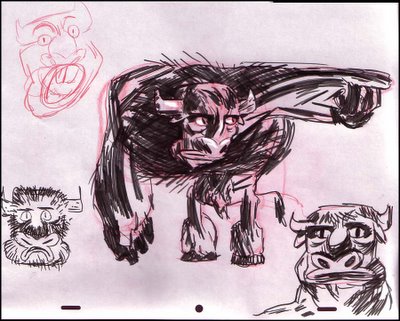 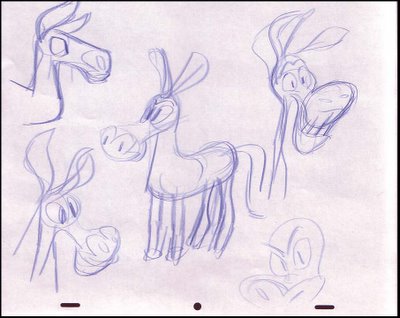 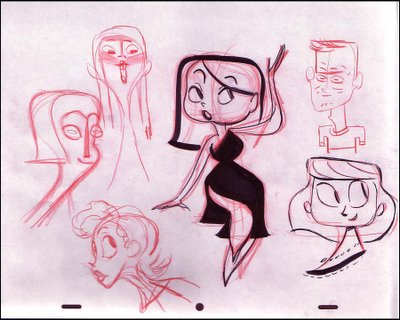 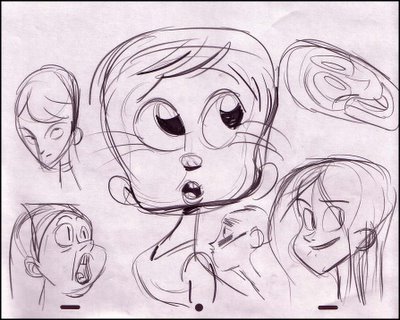 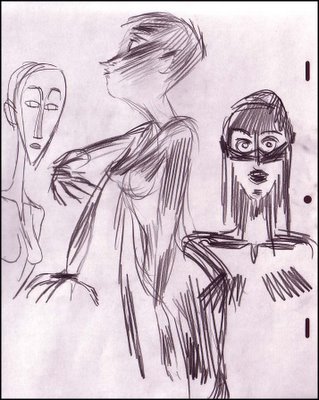 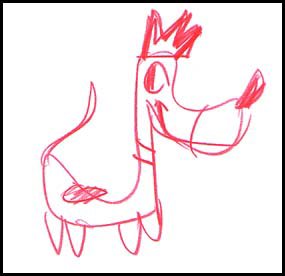 This Friday, January 13th, is the opening of the "Too Art for TV" show in New York. You may have seen it mentioned on the Brew. I have some drawings/paintings in the show. It was my first time creating work for a group show, and I had a good time doing it. I'm not sure if I like what I produced, but then again I never do. Either way, I'm proud to be in the show. So go see it. 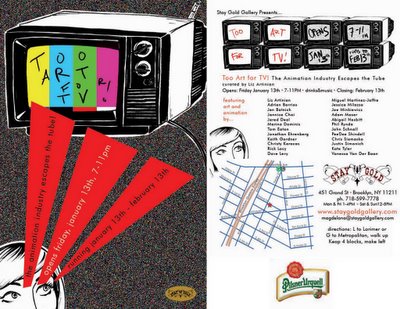