This past friday marked my last day on "The Grim Adventures of Billy and Mandy". It was an awesome experience, learned a lot, and made a ton of new friends. (I still hate you Alex ....and Mike Diedrich). But that's enough about me. Let's talk about Buddha. 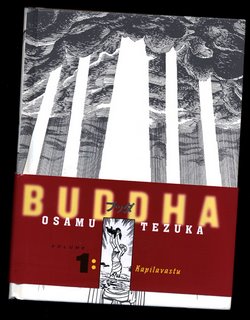 As per cousin Stephen's recommendation I went ahead and picked up the first part of Buddha by Osamu Tezuka. It was going to be my post Billy and Mandy / unemployment treat. The plan was that I was supposed to wait until I finished my last day working on the show, and then I would sit down and blaze through it.

Well, two days before my last day I cracked, sat down and flew though the first 200 pages in one sitting... leaving the remaining 200 pages for my post B&M / unemployment treat.

And a treat it was. The story is really fun, with a great mix of adventure and fantasy. With some pretty serious drama as well. It gets a little strange to read at times because it will change tones so quickly. In one scene you are learning from a doctor that one of the main characters may die, but Tezuka adds a fairly zainy element by changing the design of the doctor 3 times in nearly subsequent panels. He changes from a fairly straight forward doctor design, to the doctor scientist from Astroboy (i think) to a caricature of himself (which, interestingly enough, he actually was a medical doctor). Strange..... I wonder if he was intentionally trying to break up the seriousness of the moment, or maybe on that particular day he was drawing those pages, he felt a little wacky. You know how wacky those Osamu's get.

What I really love about the story is how much it feels like it's borrowing from ancient myth. Yet still keeping the characters fresh. And if it's not actually borrowing, Tezuka has done a wonderful job creating a world that feels huge with beliefs even larger. There are so many things happening and themes to keep track of that at first I thought i would surely have to reread sections out of pure confusion, but never did I feel lost or confused. 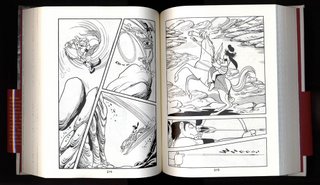 I give this book a star on the scale of square to 7. Buy it.. and tell those Amazon's Uncle Phil sent ya.

Oh yeah, and the cartooning is masterful.