It's been a wild ride over the last few months, both professionally and personally. I'm not going to get all emo-blogger, but I'll say that the last few months had some of the most powerfully positive and negative moments of my life. That's enough about that.

I've tried to make it a personal goal not to include any of my professional work on here, but today I'm going to fall back on my word. Last week, Cartoon Network ran a slew of new Billy and Mandy episodes. To celebrate that, I wanted to share a design I was (I see nothing but mistakes now) quite proud of. His name is Mighty Moe and basically he's an elderly man with an obsession for fitness. So Grim can't do what he does best. The episode he's from is called Major Cheese and was boarded by Brett Varon. I never really got to speak with Brett much about the board, he preferred working from home. But I always enjoyed the insanity of his work. It made for some very funny moments and were a load of fun to design. 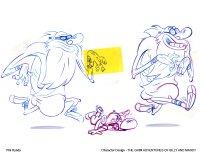 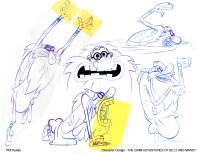 ...
Jimmy Swinnerton is a pretty amazing cartoonist. His drawings are cute and bizarre all at once. This book was a sweet find on the Heritage Auction site.... don't go there, I don't want to be outbid on anything.
Here are a few pages that I think people should see. 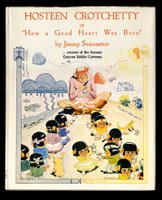 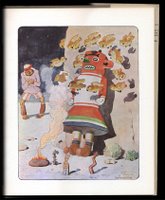 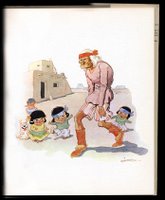 Drawing for myself has been a little slow-going lately. My mind has been in a million places. I did these drawings after meeting someone that had a sweet future retro leather jacket. ...just stuck in my head 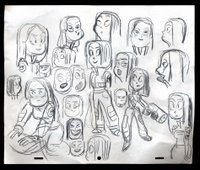 Drawings of girls with guns really isn't my thing normally, but changing it up never hurts.

I went to the UPA screening at the Egyptian earlier tonight (or is it last night by now). It was awesome to say the least. The films were all incredibly entertaining and each were unique in design, execution, mood, and story. The idea of "UPA style", which is something in animation we hear quite regularly, is almost non-existant. The most common trait amongst all of the films was that they were treated with style. Not a repetitive style, but each film was timed with style, designed with style, scored with style, etc. That was some really ballsy stuff those guys were doing. Balls that I dream of.... that sounds awful.

One of the highlights of the night was seeing one of my old teachers from SVA, Howard Beckerman. His history of animation class was one of my favorites, I just wish SVA had a better room for the class. There were poles down the center aisle, so there were 2 small screens instead of one decent one. The rows of seats were incredibly close together so you pretty much had someone's legs around your head and yours around someone else's. Not to mention that Sammy (the awesome... well... I was going to say camera booth guy, but he isn't. He's more like the lord of the amphitheater)..any way... Sammy kept the room's climate set to exactly the conditions of the womb. Simply put, It was a tough viewing experience. But it was good talking to Howard for a few minutes.

I'll leave you with my cats. (i'm the one on the left)

They're a mother and daughter I just adopted. They were named when I adopted them, Savannah and Josephine, but Jared, your suggestions are awesome; Gultar and Megatron. I feel a little funny renaming them. I even picked out some new names, but haven't used them yet. The new names I was going to use were Inca names, which my sister thought was just ridiculous.