I drew this chicken 5 minutes ago. 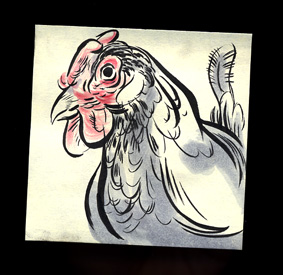 It's pretty bad, but I had fun with it. I missed some of the real subtlety of true chicken-ness. Oh well. I think, tomorrow for breakfast, I'll try to draw a chicken again.

So, I had a pretty spectacular long weekend. Mandy and I took a long deserved vacation, and donated some money to a credit card company of my choosing. We saw some giant trees and took photos with lots of orbs. We drank tropical drinks at a variety of tiki bars and ate way too much food. We got to see old friends and made a few new ones. It was definitely a solid weekend.

I want to send an internet wide thank you to our gracious hosts, Nate and Crystal. You guys are awesome. Thanks again.

On a side note, I was reminded that over a year ago I wanted to 'blog' about the differences between a "Pixar Burger" and a "Lucas Burger".

I can't remember all of the intricacies of the essay I wanted to write, but what I do remember is that the "Lucas Burger" won, hands down. It was no contest really. I was told that all of the produce served at the Skywalker Ranch was grown on the grounds and that the meat was farmed locally. I mean, c'mon, how can you compete with that? Plus, that burger was eaten overlooking the majestic "Lake Ewok".

But don't count the chefs at Pixar out yet. They serve up one mean "Pixar Pepperoni Pizza". And we all know how much animators love their cured meats. Right Gweelok?